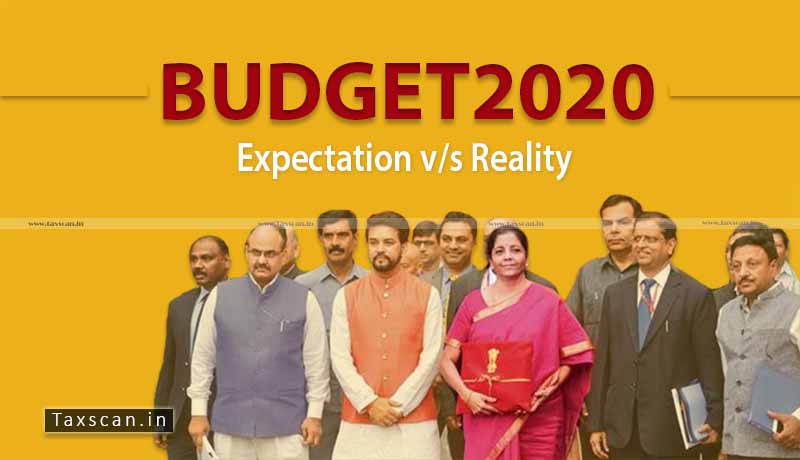 Here are a few predictions that did rounds before the presentation of the Union Budget 2020. We examine how these predictions have turned into actual facts.

Speaking on Budget 2020 with Taxscan, Abhishek A Rastogi, Partner, Khaitan & Co. said that, “The announcements around tax are simple but interesting. It appears very clear that the government has learned the benefits of the Amnesty scheme introduced for the indirect tax regime and has now proposed it even for the direct tax regime. It is expected that the scheme will resolve a lot of pending litigation, resulting in benefits to the taxpayers and the government exchequer. The interesting and innovative announcements related to the inclusion of the tax charter and cash rewards need to be closely monitored. The finance minister did not shy away from making announcements to show that the focus will remain on better tax compliance and hence appropriately commented with respect to returns, refunds, electronic invoices, Aadhaar-based verification, credit mismatch, and deep data analytics. The other important issues announced were the rate rationalization and removal of the problem of inverted duty structure. The government is keen to pragmatically address these issues apart from addressing the problem of foreign trade agreements. It is a fact that various imports under foreign trade agreements are made based on the rules of Origin. The government is clear that various checks would be put to examine these rules including those provisions where the tax leakages may happen in Customs and GST”.

He also said that “While the budget speech clearly aims to reduce the tax terrorism, the amendments proposed for GST arrest provisions may end up in increasing the hardship for taxpayers who may be subject to financial fraud investigations”.

“The deviation of 0.5% on account of unanticipated fiscal implications looks reasonable and the finance minister looks committed to attaining fiscal consolidation by gradually reducing the fiscal deficit. The task will be easy in case there is an improvement in tax buoyancy and the FM has announced various measures such as improvement in compliances, amnesty scheme for direct taxes and harsh provisions for tax frauds”, also added.

Speaking to Taxscan, Mr. Rahul Garg, Partner, PwC said that, “On the tax front, multiple changes have been introduced. The government has announced measures for abolishing the dividend distribution tax, relaxation from the filing of tax returns by foreign companies, extending the sunset clauses for some beneficial withholding tax rates and introducing a simplified personal taxation regime without any tax deductions. In addition, steps have been taken to check tax evasion through fake GST invoices, the introduction of TCS provisions on LRS remittances and foreign tour packages to widen the taxpayer base.”

Mr. Gaurav Pingle, Practicing Company Secretary said that “With respect to the removal of DDT and dividend being taxable in the hands of investors, closely-held private companies will now consider the different tax-efficient ways in rewarding the shareholders. The companies/promoters may consider buy-back of shares also”.

Adv Sherry Samuel Oommen, Head – Tax and Corporate Laws, “The reactions to the Union Budget 2020 have been primarily mixed with no clear sign of unalloyed happiness.  On the personal tax front, while one did expect a change in tax slabs coupled with an enhancement in limits for investments under section 80C, the Government has proposed an option of reduced tax rate subject to non-claiming of any incentive/deduction.  One would argue that the change was brought about with the objective of increasing spending instead of investment, whilst keeping the option of investment still alive.  To me, the change appears to rather “thoughtless” without any clear intent on the part of the Government, especially since “Aspiration India” and “Economic Development” were among the prominent themes in the Budget.

He also added that, The move to eliminate Dividend Distribution Tax would definitely help Corporate India, whilst shifting the burden of tax back to the recipient.  This move of eliminating DDT would definitely augur foreign investment into the country, as relief from taxation could also be availed under the respective tax treaties.  On the amnesty front, one did expect a scheme on the lines of “Sabka Vishwas Scheme”, providing for a relief even on the principal amount as well, which was indeed a grand success.  In my view, the “Vivad Se Vishwas” Scheme may not have many takers like the “Sabka Vishwas Scheme”, as the former scheme does not offer any reduction in the principal amount.  I would augur well if the Government could recalibrate the Scheme in line with the “Sabka Vishwas Scheme”.

CBIC notifies different due dates for GSTR-3B for Taxpayers having turnover of upto Rs. 5 cr for Jan to March, 2020 [Read Notification]