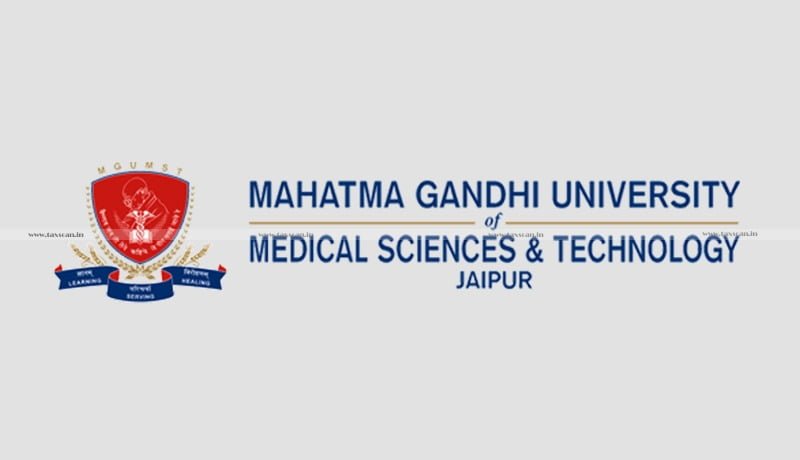 In a major relief to the Mahatma Gandhi University, the Customs, Excise and Service Tax Appellate Tribunal (CESTAT), Delhi Bench ruled that the burden of Proof lies on Revenue to prove the intention of the taxpayer to evade Excise Duty.

The appellants, M/s. Mahatma Gandhi University of Medical Sciences and Technology are registered under the categories of legal consultancy service, work contract service, manpower recruitment/ supply agency service, maintenance or repair service and security/ detective agency service. During the scrutiny of ST- 3 Returns of the appellant by AG (Audit), the Department noticed that the appellant had received services of manpower recruitment or supply agency during the period of April, 2015 to March, 2016 and had paid Service Tax under manpower recruitment or supply agency service on 75% of gross service value under reverse charge mechanism as per the provisions of Notification No.30/2012-ST dated 20th June, 2012. It was observed that the appellant was otherwise liable to pay Service Tax on 100% of gross service value in terms of the aforesaid Notification being amended vide Notification No.07/2015-ST dated 01.03.2015 with effect from April 1, 2015. With these observations, Department alleged a short payment of Service Tax from the appellant and hence proposed the recovery thereof vide Show Cause Notice No. 1611 dated 10.04.2018 alongwith the interest and the penalty. The said proposal was initially confirmed vide the Order-in-Original No.03/2019 dated March 8, 2019. However, for an amount of Rs.63,072/- alongwith the applicable interest and the penalty has been confirmed. The appeal thereof has been rejected.

The coram of Judicial Member, Rachna Gupta held that appellant has admitted his liability of paying Service Tax for receiving manpower recruitment and supply agency service to the extent of 75% on the gross value of service received under reverse charge mechanism. There is no dispute about the discharge of the liability to the said extent by the appellant.

The Tribunal noted that there is also no dispute that this liability was in terms of the Notification No.30/2012 dated June 20, 2012 which stands amended vide Notification No.7/2015 –ST dated March 1, 2015 requiring such service recipients to pay tax on 100% value of service received. There is also no dispute about the fact that the period in dispute is exactly from the date of coming into effect of said amendment i.e. April 1, 2015 till the end of the said Financial Year i.e. March, 2016 unawareness of the appellant to such a sudden change to be implemented in so proximity of time of its coming into effect cannot be ruled out.

“The alleged non-payment cannot be called a willful or intentional act of the appellant to evade the payment of duty. Otherwise also, there is no denial on part of the Department that the balance service tax on 25% value of the service has already been paid by the service provider. The Department, thus, has received 100% tax amount on the impugned transaction. Confirming such liability again under the pretext of the amendment of the applicable Notification will be nothing but will amount to receiving tax twice for the same transaction,” the CESTAT said.

Accused under PMLA entitled for legal consultation for 20 minutes everyday during the custody to ED: Delhi Court [Read Order]