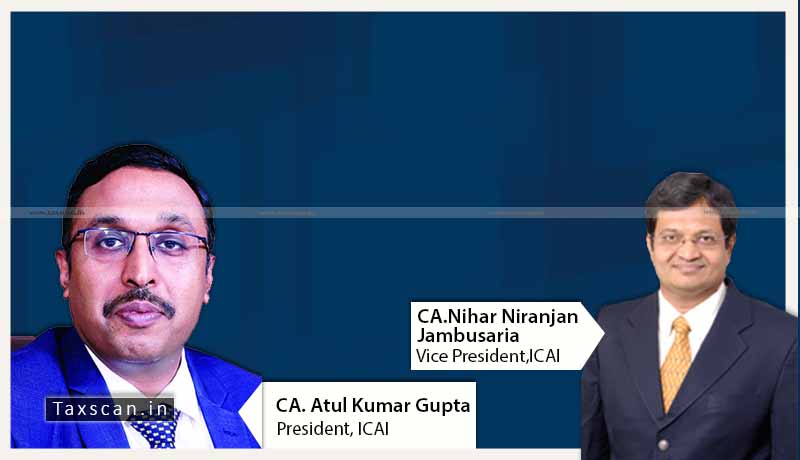 The Institute of Chartered Accountants of India ( ICAI ) has elected CA Atul Gupta as the President for the term 2020-21. CA Nihar Jambusaria is elected as the Vice President of the Institute.

The tenure of the current President CA Prafulla P. Chhajed has expired this February.

CA Atul Kumar Gupta has been elected as President of the Institute of Chartered Accountants of India for the term 2020-21 on 12th February 2020. Having served the profession for about two decades, he joined the Central Council of ICAI in 2013 wherein he remained a member for two consecutive terms, i.e. 2013-16 and 2016-19. He got elected as Vice-President in February, 2019 for the term 2019-2020.

Widely respected for his strong organizational skills and deep insight into the affairs of the profession, CA. Atul Gupta has immensely contributed to the cause of profession in the last two Councils.

A Commerce and a law graduate by education, CA. Atul Gupta has imbibed a unique perspective to view and critically address the matters. He has led the cause of profession through various committees of the Institute, serving as Chairman of Digital Accounting and Assurance Board, Board of Studies, IT Committee and Indirect Taxes Committee, among others.

CA. Atul Gupta is known and appreciated widely for his key contribution as the facilitator of the Goods and Service Tax regime, particularly in its formative years. Under his stewardship at Board of Studies, the New Scheme of Education and Training that was benchmarked with the revised International Education Standards was launched in 2017, with a thorough revision of the content of the study materials of Intermediate and Final level courses.

He, earlier, has been the Chairman of SAFA Committee on Education, Training & CPD and Director of XBRL India and ICAI-Accounting Research Foundation (ARF) in the past.

As Vice-President of the Institute, CA. Gupta acted as Vice-Chairman of all Standing Committees including Executive, Finance and Examination Committees, besides being the ex-officio member of all Non-Standing Committees and Joint Editor of ICAI Journal, The Chartered Accountant. He is a Director in the Governing Board of Indian Institute of Insolvency Professionals of ICAI. CA. Gupta is also Vice Chairman on the Board of the Extensible Business Reporting Language (XBRL) India and Director in ICAI Accounting Research Foundation.

He symbolises the transformational perspective which is going to be crucial for the relevance of all economic entities and more particularly regulators so that the transformation addresses the expectation gap while being focal to upholding transparency, probity and trust as the guiding virtues for the work programme of ICAI in times to come. Being the ardent reformer; he has a holistic grasp on the imperative of digital transformation, the developments taking nationally and globally in regard to accountancy profession and through his experience in public life all over two decades; he intends to metamorphize the overall regulatory perspective as laid under the enabling Act and Regulation governing the Chartered Accountancy profession.