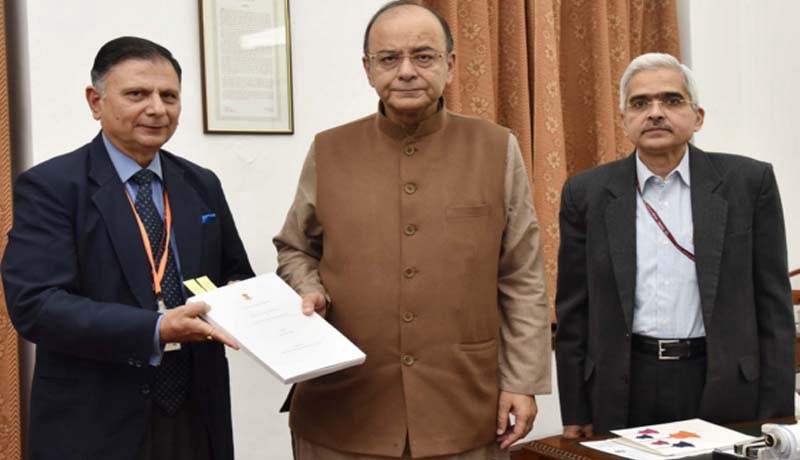 The Committee on Digital Payments constituted by the Ministry of Finance, Department of Economic Affairs under the Chairmanship of Shri. Ratan P. Watal, Principal Advisor, NITI Aayog and former Finance Secretary to the Government of India today submitted its Final Report to the Union Finance Minister Shri Arun Jaitley in his office in national capital. In its Report, the Committee has recommended that a medium term strategy for accelerating growth of Digital Payments in India with a regulatory regime which is conducive to bridging the Digital divide by promoting competition, open access & interoperability in payments. The Report recommends inclusion of financially and socially excluded groups and assimilation of emerging technologies in the market, while safeguarding security of Digital Transactions and providing level playing to all stakeholders and new players who will enter this new transaction space. It has suggested inter-operability of the payments system between banks and non-banks, up-gradation of the digital payment infrastructure and institutions and a framework to reward innovations and for leading efforts in enabling digital payments.

This Committee was seized of the developments following the decision of the Government to cancel legal tender character of currency of high denominations. The Committee has calibrated its recommendations accordingly and has provided a suitable framework for smooth and speedy transition towards a Digital Payments Economy.

The Committee had earlier submitted an Interim Report to Ministry of Finance on 21st November 2016.

Towards finalization of the Report, the Committee engaged extensively with all stakeholders and technology groups including Reserve Bank of India, State Governments, Comptroller Auditor General of India, Payment companies, Technology Companies and the Academia.

Earlier, the Ministry of Finance, Department of Economic Affairs had constituted a Committee on Digital Payments to review the payment systems in the country and to recommend appropriate measures for encouraging Digital Payments. The Committee was constituted on 23rd August 2016 under the Chairmanship of Shri. Ratan P. Watal, Principal Advisor, NITI Aayog and former Finance Secretary to the Government of India.

The terms of reference and composition of this Committee were as follows:

Composition of the Committee

Increase in Turnover due to use of Digital Mode of Payment Post Demonetisation is not a ground for Re-Assessment: CBDT [Read Circular]