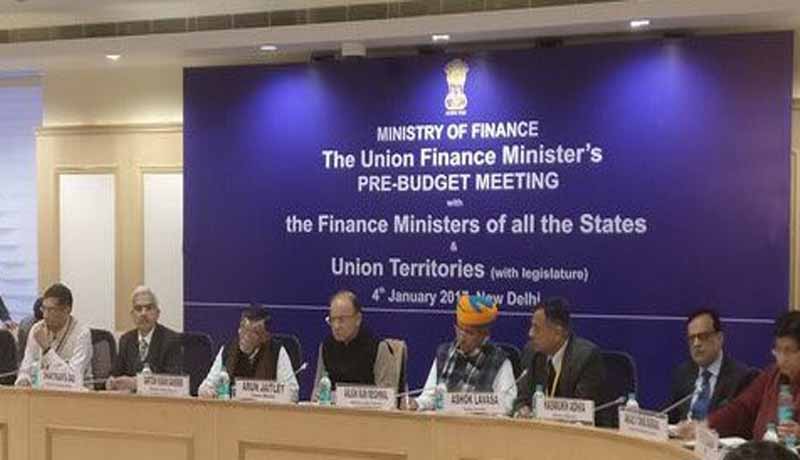 The Union Finance Minister Arun Jaitley said that various steps taken by the Central Government in recent past to unearth black money will help in curbing corruption and making the Indian economy more cleaner, transparent and efficient.

He also said that the world economy is passing through a difficult phase and is quite fragile. However the Finance Minister said that in case of Indian Economy, macro and micro indicators are quite strong and Indian economy is able to emerge as one of the fastest growing economies in the world. The Finance Minister stated that the multifarious reforms initiated by the Central Government in recent past would be taken forward in the coming months and urged the States to work together for putting India on the path of higher growth.

The Finance Minister was making his Opening Remarks during his Pre-Budget consultations with the Finance Ministers of all the States and UTs (with legislature) here today. The meeting was attended among others by the Chief Minister of Puducherry, Dy. CMs of Gujarat and NCT of Delhi, Finance Ministers/ Ministers representing their respective States/UTs and Senior Officers from the States/UTs. From the Central Government, along with the Union Finance Minister, those attended today’s Meeting included Santosh Gangwar, Minister of State for Finance,  Arjun Ram Meghwal, Minister of State for Finance & Corporate Affairs, Ashok Lavasa, Finance Secretary, Shaktikanta Das, Secretary, Department of Economic Affairs (DEA), Dr Hasmukh Adhia, Revenue Secretary, Ms Anjuli Chib Duggal, Secretary, Department of Financial Services (DFS), Dr Arvind Subramanian, Chief Economic Adviser (CEA) and other senior officers of the Ministry of Finance.

There after, various suggestions were made by the participating Chief Minister, Deputy Chief Ministers, and Finance Ministers of different States/UTs. Many of those suggestions were general in nature and most of them were State specific or policy oriented or both. Most of them gave their suggestions in writing as well to the Finance Minister. Common suggestions made during the meeting included more focus on relaxing FRBM limit in case of States for raising their borrowing capacity by raising it by 1% or at least by 0.5%, expansion of bank branches in most remote areas of the country, expressed need for giving fiscal stimulus, allocation of high outlay for National Rural Employment Generation Programmes, revival of National Rural Drinking Water Programme, launching of new scheme(s) for urban poor, allocation of more funds for agriculture, irrigation, unorganised, MSME and Service Sectors among others.

Other suggestions include setting-up of Inter-States Green Corridor for sharing of green energy among the States, early solution of oil royalty related issues, certainty about devolution of funds to States well in advance and changes therein if any, should be made with adequate notice so that States can plan accordingly and make effective use of funds, limit of NABARD Refinancing of Cooperative Bank loans to farmers be raised for affecting affordable credit to farmers, higher MSPs be declared for pulses and coarse cereals and timely release of funds for Centrally Sponsored Schemes such as Sarv Shiksha Abhiyan and, Madhyamik Shiksha Abhiyan, among others.

Other general suggestions included that in view of GST, merger of Railway Budget with General Budget, discontinuation of funds under plan and non-plan heads and demonetisation among others, the Budget as such needs to be reinvented. It was suggested that there is need to move from fiscal federalism to resource federalism

At the conclusion, the Finance Minister assured the States/UTs that the suggestions made by them in the meeting and the written memorandum submitted by them would be duly examined and suitably considered as part of the Budget proposals for 2017-18. This would be in keeping in view with the spirit of federalism enshrined in the Constitution.