END_OF_DOCUMENT_TOKEN_TO_BE_REPLACED

No doubt, the persons dealing with GST, be the taxpayers or the practitioners would loose around 10 years of their life due to the pressure which they undergo in keeping track of all notifications, circulars and instructions from time to time; filing of returns after return; reconciliations; and to top it all, the portal glitches. The latest addition to their woes is the introduction of sub-rule (4) to Rule 36 of the CGST Rules, 2017 with effect from 09.10.2019. The said sub-rule (4) of Rule 36 is reproduced below.

Section 42 of the CGST Act, 2017 deals with “Matching, reversal and reclaim of reduction in output tax liability”.  It may be noted that every taxpayer shall furnish details of outward supplies in form GSTR 1; based on such GSTR 1 filed by the suppliers, all recipients would be informed about the ITC available to them, through GSTR 2A; based on such GSTR-2 A, communicated to them, every taxpayer shall file the return GSTR 2 (now suspended).  It may be further noted that even if any ITC is not reflecting in GSTR 2 A, the taxpayer can claim ITC on the basis of the invoices available with him, which are not reflected in GSTR 2 A. Such credits would remain unmatched with the corresponding GSTR 1s filed by the suppliers.

Such mismatch would be communicated to both the supplier and recipient and they shall strive to rectify the same to ensure matching. If the ITC remains unmatched, such ITC would be liable to be repaid, by way of addition to output tax liability. Such addition to output tax liability can be reclaimed, if subsequently the supplier rectifies the error and the credit is made to reflect in 2 A.  The following points may be noted from Section 42:

For ready reference, Section 43 A is reproduced below.

SECTION 43A. Procedure for furnishing return and availing input tax credit. — (1) Notwithstanding anything contained in sub-section (2) of section 16, section 37 or section 38, every registered person shall in the returns furnished under sub-section (1) of section 39 verify, validate, modify or delete the details of supplies furnished by the suppliers.

(2) Notwithstanding anything contained in section 41, section 42 or section 43, the procedure for availing of the input tax credit by the recipient and verification thereof shall be such as may be prescribed.

(3) The procedure for furnishing the details of outward supplies by the supplier on the common portal, for the purposes of availing input tax credit by the recipient shall be such as may be prescribed.

(5) The amount of tax specified in the outward supplies for which the details have been furnished by the supplier under sub-section (3) shall be deemed to be the tax payable by him under the provisions of the Act.

(6) The supplier and the recipient of a supply shall be jointly and severally liable to pay tax or to pay the input tax credit availed, as the case may be, in relation to outward supplies for which the details have been furnished under sub-section (3) or sub-section (4) but return thereof has not been furnished.

(7) For the purposes of sub-section (6), the recovery shall be made in such manner as may be prescribed and such procedure may provide for non-recovery of an amount of tax or input tax credit wrongly availed not exceeding one thousand rupees.

(8) The procedure, safeguards and threshold of the tax amount in relation to outward supplies, the details of which can be furnished under sub-section (3) by a registered person, —

(i) within six months of taking registration;

(ii) who has defaulted in payment of tax and where such default has continued for more than two months from the due date of payment of such defaulted amount, shall be such as may be prescribed.

A new section is being introduced in order to enable the new return filing procedure as proposed by the Returns Committee and approved by GST Council.

The new return filing procedure has been set in motion on a trial basis, where the erstwhile GSTR 1 / GSTR 2 / GSTR 2 A / GSTR 3 / GSTR 3 B would be replaced by one main return GST RET 1 with two Annexures– ANX-1 and ANX-2. The main departure in the new return procedure from the old return procedure is “matching”.  It may be noted that under the new return filing procedure, suppliers would upload the invoices on real-time basis and the recipients would be entitled to avail ITC only to the extent of credit which is uploaded in ANX-2, based on ANX-1 filed by the suppliers. It may be noted that return ANX-2 has provision to avail unreported credits, to the extent allowed by rules.

It may also be noted that Section 43 A inter alia excludes the application of Section 42 and once Section 43 A comes into force, Section 42 and the requirement of matching would not be applicable. Matching becomes redundant under the new return procedure under Section 43 A, as credit is allowed only to the extent auto-populated in ANX-2.

This absence of facility to claim missing ITC may pose a genuine problem to the taxpayers. Those small suppliers, who file quarterly returns may not upload their invoices on a real-time basis and thus the recipient would not be able to claim ITC. In order to redress such grievance, sub section (4) of Section 43 A provides for allowing ITC to a certain extent, even if the supplier has not filed his return – ANX-1.

But it should be remembered that Section 43 A is yet to come into effect.

It may be observed that sub-rule (4) of Rule 36 now introduced is in line with Section 43A (4) of the Act. It derives its authority apparently from Section 43 A (4). Further, it may be noted, Section 42 and the requirement of matching is still in force, so long as section 43 A is not notified.  But contrary to such requirement of matching prescribed under Section 42, Rule 36 (4) extends ITC benefit up to 20 % of the ITC which matches and thus runs counter to the mandate of Section 42 and hence ultra vires Section 42. If a taxpayer now claims additional ITC to an extent of 20 % of matched credit, is the department precluded from insisting on matching for this 20 % ITC?  Not at all. Still, the department could proceed to deny such credit. So, what is the purpose of Rule 36 (4)?

Hence, it is honestly felt that sub-rule (4) of Rule 36 should have been brought into force simultaneously along with the coming into effect of Section 43 A and its premature introduction is ultra vires section 42 of the Act. 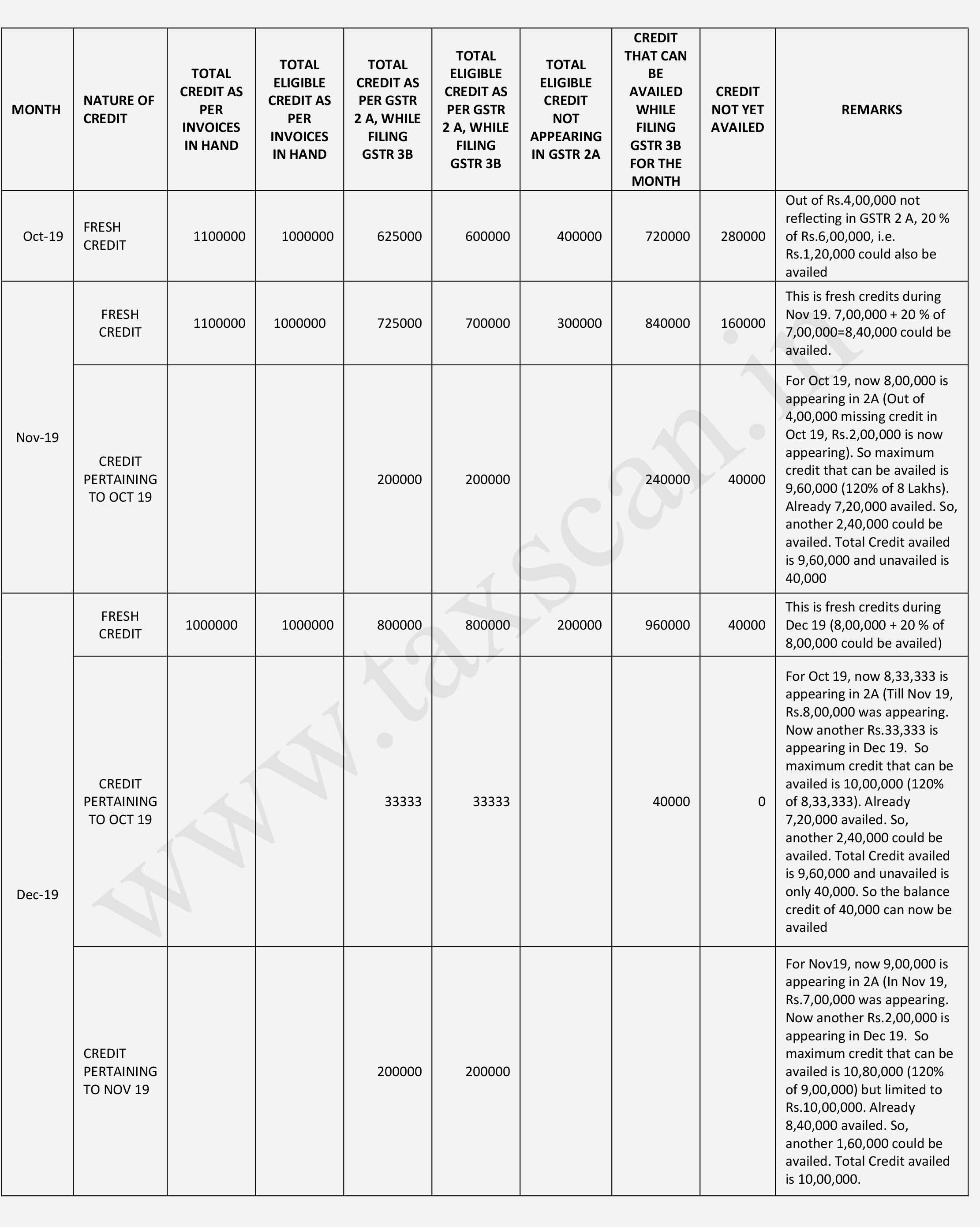 The following practical issues would make compliance with this sub-rule, a nightmare.

The sanest advice one can give is –

“Take only what comes to thee,

The balance is not going to flee”.

Do not bother about Rule 36 (4). Take only the credit reflecting in GSTR 2 A, even it may lead to working capital blockades.

In the wake of the difficulties posed due to lockdown restrictions, the Department of Goods and Services Tax (GST), Kerala has notified...
Read more
Headlines

In view of the continuing health crisis in the country due to spread of COVID-19 Pandemic, the Institute of Company Secretaries of...
Read more
Headlines

The Madras High Court while upholding the decision of the CIT(A) and Tribunal held that the Activity of sieving to separate dust...
Read more
Headlines

In the wake of the difficulties posed due to lockdown restrictions, the Department of Goods and Services Tax (GST), Kerala has notified...
Read more

CS Exams: CSEET to be conducted on 29th August 2020 through Remote Proctored Mode