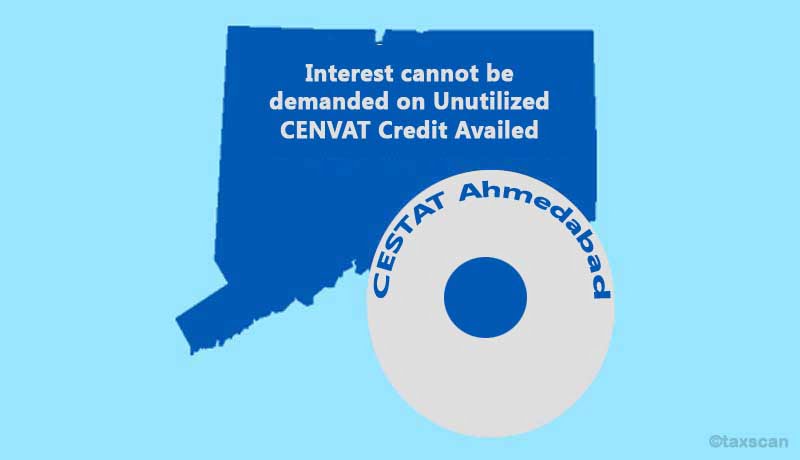 In a recent ruling, the CESTAT, Ahmedabad bench held that interest cannot be demanded on the unutilized CENVAT credit availed under Rule 14 of the CENVAT Rules, 2004. The bench was hearing a bunch of appeals wherein the appellants have availed inadmissible CENVAT credit on various grounds but later on being pointed out, reversed the same before utilization or not utilized the same. The Department proposed to recover interest for the period of availing the CENVAT credit, even though the same has not been utilized.

Before the Tribunal, the appellants claimed that interest on the amount of CENVAT credit availed but not utilized is not recoverable. The bench referred Rule 14 of the CENVAT Credit Rules, 2004 as per which, “where the CENVAT credit has been taken or utilized wrongly or has been erroneously refunded, the same along with interest shall be recovered from the manufacturer or the provider of the output service and the provisions of Sections 11A and 11AB of the Excise Act or Sections 73 and 75 of the Finance Act, shall apply mutatis mutandis for effecting such recoveries.”

It was contended on behalf of the appellant that in the case of case Indo Swift Laboratories Ltd, the apex Court held that as per the above Rule, mere availing of credit in the Books of Accounts is nothing but only a book entry, hence, interest cannot be charged when the credit is not utilized. They further submitted that Rule 14 has been amended with effect from 17.3.2012 whereby the expression taken or utilized has been substituted with the expression taken and utilized wrongly. It is therefore, contended that the said amendment since made the position of law clear, should be understood as clarificatory in nature and retrospective in application.

The Revenue, on the other hand, contended that the various High courts and the Supreme Court in Ind-Swift Laboratories Ltds case observed that interest would be payable on the credit wrongly availed even if not utilized.The Revenue also rebutted the argument with regard to the amendment to Rule 14 by stating that the Mumbai tribunal had rejected the said contention observing that the said Notification has prospective effect only.

The bench noted that the apex Court, in the above impugned decision, observed that “the manufacturer or the provider of the output service becomes liable to pay interest along with the duty where CENVAT credit has been taken or utilized wrongly or has been erroneously refunded and that in the case of the aforesaid nature the provision of Section 11AB would apply for effecting such recovery.”

The bench relied on its judgment in Gujarat Guardian Ltd, wherein it was held that “the law laid down by the Honble Supreme Court and High Courts relied upon by the appellant were with respect to admissibility of an exemption Notification when there was a condition for availing exemption that Cenvat credit with respect to certain inputs should not be taken by an assessee. It was in that context that Honble Supreme Court and jurisdictional High Courts gave the rulings that reversal of Cenvat credit will amount to not taking Cenvat credit and accordingly benefit of relevant exemption notifications was held to be available to such assessees who reverse Cenvat credit earlier taken.However, in the present proceedings in hand there is a specific ruling by the Apex Court on the issue in the case of UOI v. Ind-Swift Laboratories Ltd. (supra) with respect to Rule 14 of Cenvat Credit Rules, 2004.”

The bench also quoted the High Court decision in Hindustan Insecticides Ltd. vs. C.C.E wherein the Court held that “A reading of the aforesaid paragraph would show that in the said case notice of payment for interest was issued after four years and it was held that it was beyond a reasonable period and the department could recover the amount from the Assessing Officer, who had not taken steps for four years and not from the respondent-assessee therein. The finding of the Supreme Court on interpreting the applicable Act was that no limitation period was prescribed, therefore, proceedings for recovery could be initiated within a reasonable time.”

Relying on the above judgment, the bench allowed the appeal and said that “The ratio in the said case is distinguishable for the reason that payment of interest is to be made under Section 11A and, therefore, the period of limitation prescribed therein would equally apply as has been held by the Delhi High Court in the case of Kwality Ice Cream Company (supra), Punjab and Haryana High Court in the case of M/s. VAE VKN Industries Private Limited (supra) and Gujarat High Court in Gujarat Narmada Fertilizers Company Limited (supra). These judgments have relied upon the decision of the Supreme Court approving the view of the Tribunal in TVS Whirlpool Limited (supra) wherein parimateria provisions of the Customs Act were considered. This being a distinguishing feature, we feel that the appellant is entitled to succeed in the present appeals. The question of law is accordingly answered in affirmative, i.e., in favour of the appellant and against the respondent-Revenue.”