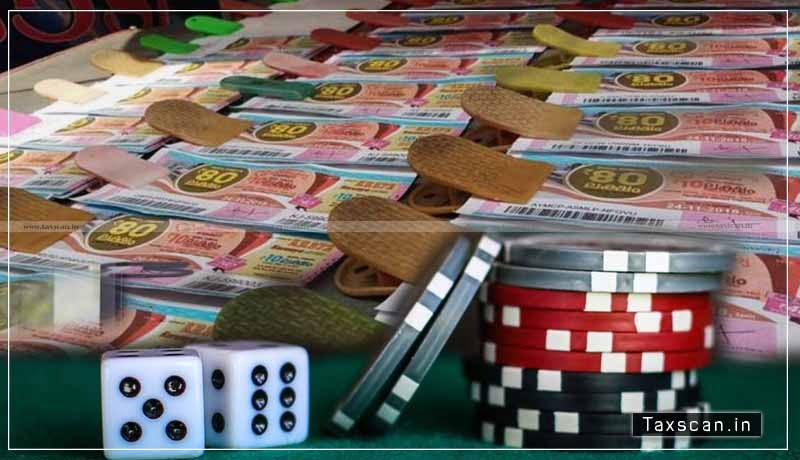 The Supreme Court upheld the validity of imposing Goods and Service Tax (GST) on Lotteries and Gambling. The Court granted the petitioner the liberty to challenge notification by which rate of GST for lottery run by the State and lottery organized by the State have been made the same.

The petitioner, Skill Lotto Solution  Pvt. Ltd. an authorized agent, for sale and distribution of lotteries organized by State of Punjab has filed this writ petition impugning the definition of goods under Section 2(52) of Central Goods and Services Tax Act, 2017 and consequential notifications to the extent it levies tax on lotteries.

The petitioner sought for a declaration that the levy of tax on lottery is discriminatory and violative of Articles 14, 19(1)(g), 301 and 304 of the Constitution of India.

The Parliament enacted the Central Goods and Services Tax Act, 2017 to make provisions for levy and collection of tax on intra-State supply of goods or services or both by the Central Government and for matters connected therewith or incidental thereto.

After the enactment of Central Goods and Services Tax Act, 2017 , Notification was issued by Government of India dated June 28, 2017 in exercise of power conferred by Section 9(1) notifying the rate of the integrated tax.

The petitioner contended that the lottery is not a goods and under the Central Goods and Services Tax Act, 2017, GST is levied only on goods, hence levy of GST on lottery is ultra vires to the Constitution.

The petitioner has also relied on various taxing statutes of other countries, wherein the petitioner submits that prize money of the lottery ticket is not computing for levy of tax.

The three-judge bench of Justice Ashok Bhushan, Justice R.Subhash Reddy, and Justice M.R. Shah concluded that while determining the taxable value of supply the prize money is not to be excluded for the purpose of levy of GST.

The Court while rejecting the contention of the petitioner stated that the taxing policy and the taxing statute of various countries are different which are in accordance with taxing regimes suitable and applicable in different countries.

The Supreme Court was of the view that the petitioner is not entitled to reliefs as claimed in the writ petition.

“We accept the above prayer of the petitioner. The petitioner shall be at liberty to challenge the notifications dated 21.02.2020/02.03.2020 (challenging the rate of levy tax uniformly at 28%) separately in appropriate proceedings,” the court said.