Beware Foreigners!! Even a Gold Bangle can be a Threat to you 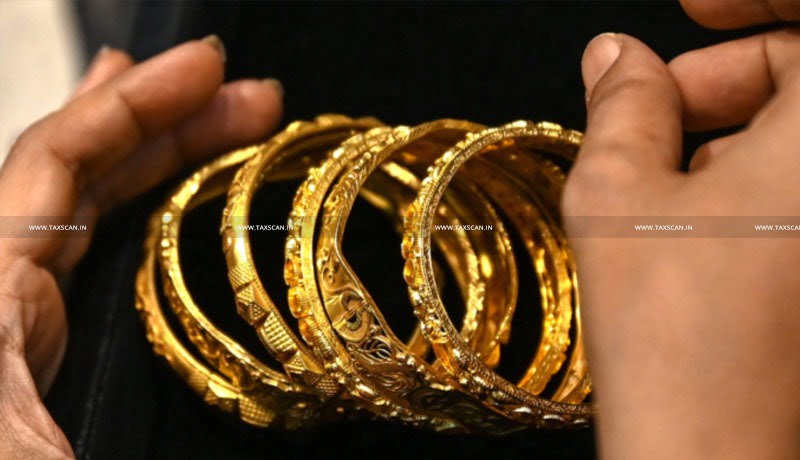 “Conflicts are aplenty in this world because of gold” – famous Malayalam poet Kunchan Nambiar satirically wrote.

Madras High Court on Tuesday held that gold/silver ornaments that are worn in person and that exceed Rs. 50,000 in value have to be declared before the Customs Authority. Justice C Saravanan observed that import of jewellery worth more than Rs. 50,000 could not be considered as bona fide baggage and could not be exempted from customs duty.

FACTS OF THE CASE

The petitioners are members of the same family and are Sri Lankan nationals. They arrived at the Chennai Airport on 06.05.2017 along with two minor children. All the petitioners were wearing 1594 kgs of gold jewelleries valued at Rs.43,95,854/-. They attempted to walk through the green channel along with two minor children wearing 1594 kgs of gold jewelleries without making declaration before the Customs Officers. Apart from the jewelleries, the first petitioner had also purchased about 112 bottles of liquor valued at Rs.1,50,000/-. The officers of the Air Customs Department intercepted them and found that there was an attempt to smuggle liquor beyond the permissible limit. Subsequently, a show-cause notice under Section 124 of the Customs Act, 1962 was issued to them for which a reply was duly filed.

Rule 3 of the Baggage Rules, 2016 which is relevant for this case points out that: –

An Indian resident or a foreigner residing in India or a tourist of Indian origin, not being an infant arriving from any country other than Nepal, Bhutan or Myanmar, shall be allowed clearance free of duty articles in his bona fide baggage, that is to say,

(a) used personal effects and travel souvenirs; and

(b) articles other than those mentioned in Annexure-I, up to the value of fifty thousand rupees if these are carried on the person or in the accompanied baggage of the passenger

Provided that a tourist of Indian origin, not being an infant, shall be allowed clearance free of duty articles in his bona fide baggage, that is to say, (a) used personal effects and travel souvenirs; and

(b) articles other than those mentioned in Annexure I, up to the value of fifteen thousand rupees if these are carried on the person or in the accompanied baggage of the passenger Provided further that where the passenger is an infant, only used personal effects shall be allowed duty free.

Annexure-I to the Baggage Rule, 2016 provides in the 5th point that Gold or silver in any form other than ornaments.

The expression “tourist” is defined in Rule 2(1)(v) of Baggage Rules, 2016 as follows: “Tourist means a person not normally resident in India, who enters India for a stay of not more than six months in the course of any twelve months period for legitimate non-immigrant purposes”.

As the petitioners are not tourist of Indian origin, proviso is not relevant for them. The expression “personal effect” is defined in Rule 2(vi) of the Baggage Rules, 2016 as follows: “Personal Effects” means things required for satisfying daily necessities but does not include jewellery”.

As per Section 79 of the Customs Act, 1962, bona fide baggage of a passenger is exempted from payment of duty.

The Court observed that “Jewellery items are not articles of personal effect. Jewellery are any other articles other than the articles of “personal effect”. Therefore, the petitioners being tourist within the meaning of Rule 2(1)(v) of the said Rules are governed by Sub Clause (b) of the Rule 3 of Baggage Rules, 2016. The said Rule read with Annexure I makes it clear that gold or silver ornaments upto a value of Rs.50,000/- (Rupees Fifty Thousand only) worn in person or carried on person are only freely importable.

Import of gold or silver ornaments exceeding Rs.50,000/- (Rupees Fifty Thousand only) cannot be considered as part of bona fide baggage of tourist travelling to India. The petitioner should have paid customs duty, if they intended to deliver, sell them or gift them to a person in India. Hence if the value of gold and silver ornaments exceeded the value under the Rules, the petitioners were required to make appropriate declaration.”

One gram of gold (24 carat) cost 4771 INR in India. So, if a foreigner wears around 9 grams of gold, then he is under threat. Law should be an instrument of social engineering and Courts the custodians of its subjects. The society is progressing and the scenario is changing rapidly, such utopian laws that causes trouble to people should amended so as to meet the needs of changing times. So, if time demands change in law, it should be brought about because is for the people. Sticking onto utopian principles wont accelerate progress in the society.

Gandhiji quoted about Justice that “This is not a maxim to be mouthed in courts of law but to be applied in every concern of practical life”. How much can this judgment be followed in practical life? Is a question that concerns us. For a Law to be good it should be applicable practically. How much of the utilitarian principle can be attributed to the said judgment? Is another concern. Marcus Cicero said “The good of the people is the greatest law”.

Let the eyes of the Goddess of Law open to decide the best.

Support our journalism by subscribing to Taxscan Premium. Follow us on Telegram for quick updates.