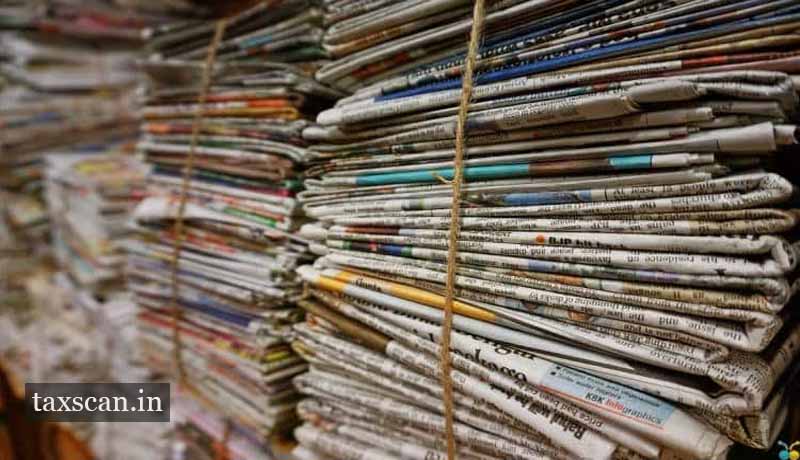 In State of Tamil Nadu vs. Tvl.P.S. Sambandam Mudaliar & Co, the Madras High Court upholding the decision of the Tribunal held that old newspapers when sold as such would be covered by the exemption provided in the Constitution and sale thereof would not be liable to Sales Tax.

The respondent is a dealer in waste paper. For the assessment year 1998-99, the Assessing Authority disallowed the exemption claimed on interstate sales of old newspaper made by the assessee for Rs.7.61 lacs and levied tax at 10% in respect of these sales not covered by ‘C’ declaration forms and allowed tax at 4%, in respect of sales covered by ‘C’ declaration forms. Appellate Assistant Commissioner confirmed the assessment and dismissed the appeal filed by the respondent. Thereafter appeal was filed before Tamil Nadu Sales Tax Appellate Tribunal.

The Tribunal relied on the decision of the Supreme Court in the case of Tvl. Sait Rikhaji Furtarnal and Another v. State of Andhra Pradesh wherein it was held that old newspapers when sold as such would be covered by the word “newspapers” in entry 54 of List II and entry 92 of List 1 of the Seventh Schedule to the Constitution of India and it was, therefore beyond the competence of the State Legislature to impose sales tax on sale of old newspapers. Sale of old newspapers sold as such will be exempt from sales tax imposed by the State. Therefore, the Tribunal set aside the assessment order. Aggrieved, the State appealed to High Court.

The bench comprising of Justice S. Manikumar and Justice V. Bhavani Subbaroyan referred two cases decided by the Supreme Court. The first case was Indian Express (P) Ltd. vs. State of Tamil Nadu, wherein the Supreme Court held that when newspapers are sold to the reading public, they are sold as medium containing information regarded as news. They are purchased by members of public to acquaint themselves with the current news. Information is news when it is fresh and new. So, when newspaper becomes old, it loses its characteristic as newspaper. When unsold surplus copies of newspapers are disposed of by weight, their sale cannot be regarded as the sale of newspapers.

However, in the second case, Sait Rikhaji Furtarnal v. State of Andhra Pradesh, decided later by the Supreme Court held that old newspapers would be covered by the word ‘newspapers’ in entry 54 of list II and entry 92 of list I of the Seventh Schedule to the Constitution of India and it is, therefore, beyond the competence of the State Legislature to impose Sales Tax on the sale of old newspapers.

Referring to various decisions of the Supreme Court, the Bench observed that when there are two decisions, on the same point of law, the judgment rendered at a later point of time, proximate and which has considered the decisions of the Apex Court, will prevail over the former.

“After considering the facts and circumstances of the case and taking note of the decisions of the Hon’ble Supreme Court and the clarification issued in K. Dis. Acts. Cell/V/97174/92, dated 19.11.1992, we do not find any manifest illegality, warranting reversal of the order of the Tribunal. Tax Case (Revision) is dismissed.” observed the Bench.

Issuance of an Allotment Letter from a Builder / Developer not sufficient to Claim Sec 50 Benefit: ITAT [Read Order]

Roll Out of E-Way Bill system for Intra-State Movement of Goods in Maharashtra, Manipur and Union Territories from Tomorrow