Supreme Court and High Court Weekly Round Up 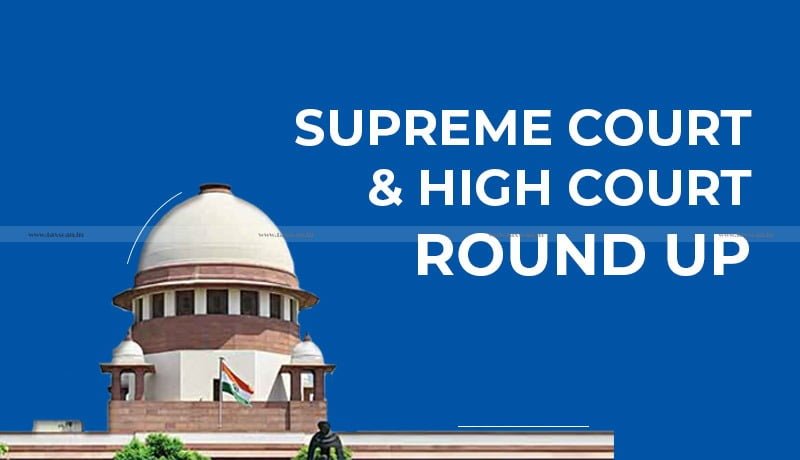 This weekly round-up analytically summarizes the key stories related to the Supreme Court and High Court reported at Taxscan.in during the previous week from December 27, 2021 to January 1, 2022.

The Supreme Court has held that the Money deposited in a bank not held by it as Trustee but it becomes part of banker’s fund payable on-demand with agreed interest rate.

The Madras High Court directed the GST Authority to immediately transport goods if no case is made out. The single bench of Justice C.Saravanan held that the show cause notices details and articulates the case of the respondent. It is for the petitioner to reply to the show-cause notices to have the goods cleared. If the goods were really meant to be sent to Karnataka for which the petitioner had allegedly paid IGST amounting to Rs.38,79,019/- under the provisions of IGST Act, 2017, no useful purpose will be served by quashing the show cause notices by directing the respondents to issue a fresh show-cause notice. It would only further delay the clearance of the imported consignments.

The Bombay High Court held that the Reliance Industries conspired to commit offences under Prevention of Corruption Act, casting shadow on monies sought to be offered to Income tax.

The Bombay High Court quashed the show cause notice  to Corporate Debtor, to submit return for assessment year falling prior to approval of Resolution Plan under IBC.

The Delhi High Court restored the Bail to persons accused of repeatedly indulging wrongfully passing of ITC subject to deposit of Rs.1 lakh.

The Jharkhand High Court refused to discharge the PCIT for alleged Corruption and recovery of cash worth Rs. 3.715 crore.

In a major setback to Bennett Coleman, the Bombay High Court held that the assessee required to pay interest where advance tax  paid is less than 75% of the assessed tax.

The Punjab & Haryana High Court has allowed the assessee to file application for Revocation of Cancellation of Registration wherein GST Registration was cancelled before March 1, 2020 due to non-furnishing of returns for six months, extending the benefits of notifications dated August 29, 2021.

The Calcutta High Court held that the writ petition not maintainable as Statutory Alternative Remedy available for challenging GST Order passed in violation of principle of natural justice.

The Madras High Court while dismissing a plea challenging Alternation of charges on persons accused of non-payment of Income Tax arrears held that Charges can be altered even after reversing Judgement.

The Madras High Court while quashing the proceedings alleging willful default in filing ITR held that it is the Department’s Duty to verify and issue PAN cards.